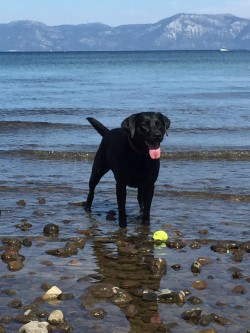 KT (also known as Katie) came into our lives in May 2012. KT is a black lab who was born in a shelter in Fresno County in California. She was adopted at the age of eight weeks and surrendered by the owner when she was approximately seven months old because “she became too difficult to manage”. She was adopted from the shelter some time later and within two weeks of that adoption, the owners surrendered her because they said she “had too much energy”. She had been taken to a high kill shelter in the town of Fresno. While in the shelter, she stayed in her kennel 24/7. We were told that she was not adopted because she barked a lot, had a bad reputation after being returned twice, and because of her black color. She reached her maximum allotted time in the shelter and was forty eight hours from being euthanized when an organization in San Francisco, CA rescued her, along with several other dogs, from that shelter. They sent a truck down to Fresno to pick all of the dogs up and placed them all in foster homes immediately as they have no shelter to house the animals they rescue. We had been looking to adopt a dog for approximately four months from this organization when I saw KT’s picture on their web site. She looked so thin and scared, but she was so cute! We went to meet her about 3 days after her arrival to her foster home in northern California. She was very sweet, mild mannered and very cute. We had no idea of her history and we adopted her on the spot. We were told that she was between 10 and 12 months old at that time. Within a matter of hours, she seemed to become a different dog than the one we played with at the foster’s house!! We quickly realized she had some issues with her temperament and training. I think she was on her best behavior that day because she wanted to be adopted so badly! During the first week of having her, I thought we had made a huge mistake in taking her because I wasn’t sure I was qualified to train such an unruly dog. She was not trained at all, not even basic commands, and was not house broken. She did not know how to walk on a leash, play ball, swim, basically she knew nothing except how to misbehave! At one point she tried to show me that she was the boss by putting her teeth on my ankle. At that point, I was really worried. But with lots of training, love and compassion, KT has turned into the best dog in the world. She is now almost five years old and she is playful, smart, loving and just so darned cute. She knows and obeys all commands, walks great on a leash, loves to snuggle and is the best hiking and running buddy you could ask for. I wouldn’t give her up for the world! All it takes is lots of love and patience!