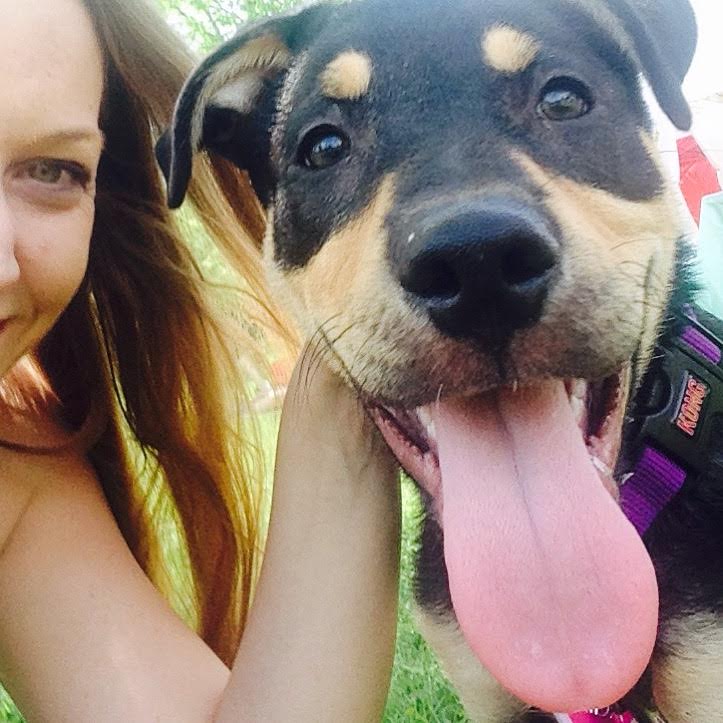 A lot of people think a rescue means that the dog was abused in its first home. I now know this is not always the case. Sometimes the rescuer IS also the previous owner.

I had been considering a dog for a while. For the past 16 years my husband, Chris, and I enjoyed the company of a cockatiel named Baby. I called her my soul pet because it amazed me how much love, happiness and joy she brought to my world. So we had grown accustomed to a pet that required a lot of attention. When she passed away I longed for a similar type of companionship and we realized over the course of nearly two decades our lifestyle had changed. We were getting out a lot more and enjoyed drives out to the country, walking on the beach and meeting new people. Finally, a dog sounded like a pet we could take full responsibility for and offer our home and love to.

We had always imagined adopting a rescue dog but we are also inexperienced with dogs (a first for both of us since adulthood!) and have 3 cats. The idea of an adult dog that may be challenging seemed quite daunting. We wanted to be in a situation we could turn into a success and be confident that we could be a forever home to a dog that needed rehoming.

I spent weeks on the lookout for an opportunity and researched rescue groups, shelters and private listings. So many wonderful dogs out there but none of them seemed like the perfect match for us.

I woke one day and still in bed, had the impulse to check the classifieds for dogs that needed a new home. I immediately stumbled across an ad for a 4.5 month old Rottweiler / Shepherd cross and after seeing her picture; big expressive eyes, pronounced little brown eyebrows and a giant pink tongue I immediately fell in love. I wrote to inquire still from bed and they called less than 15 minutes later.

“Bob” told me that the female pup lived with him and his fiancée and they no longer had the time to give her the life she deserved. I asked if she had any problems and he replied, well she cries…yes, I could hear her whimpers in the background. I told him we would come to see her that evening.

Chris and I met him outside his building and when she saw us she came bounding over. I leaned down over her and she snapped at my face. She looked skinny, her collar too tight and her leash had broke in multiple places and was tied in knots. He handed me a plastic bag with her stuff: two dishes I recognized from the dollar store, two toys, her vaccination record and some food to last a few days. He explained they were working too much and it just wasn’t fair. She was spending puppyhood in a cage.

I really respect this couple because Frida is adorable and it must have been incredibly difficult to give away a cute puppy you have already bought accessories for, brought to the vet and invested much time and effort into during the demanding and critical first couple of puppy months; yet they didn’t wait until she was grown. They recognized she wasn’t going to reach her potential with them and they made a tough call.

They rescued her too! That first day was overwhelming and I meant to write them but forgot. So they wrote first to ask about her. They cared. She’s a well adjusted little dog and I know they didn’t hurt her. In fact for the most part Frida has great manners. They really tried but they were just in over their heads.

It’s amazing how quickly a neglected dog’s behaviour can deteriorate though. From being crated all day she has separation anxiety and makes a lot of noise when you leave the room. And she bites….hard. A few days after adopting her she became so out of control on a walk she bit my arms multiple times until they bled and bit and tore through my pants. I had to call Chris to help me home with her. As I was waiting for him I started to cry. I wanted so bad to be her buddy and there I was feeling completely overwhelmed, bullied and with no control over a 35lb puppy.

To my complete surprise she started crying too and came over to lick me. Her awareness and compassion made me cry even harder. I gained the understanding that she is a complicated being and adjusting to this new life. Still, I was so disappointed and defeated I went home to bed and cried myself to sleep wondering if I made a mistake. My arms and legs hurt, my clothes were ruined and I worried I was just too soft to have a dog.

I woke up and realized I had two choices; I could be afraid and completely fail her or I could go act like that had never happened. I went downstairs, put her collar on and took her out for a walk…

We researched for hours on correcting her issues and keeping her body and mind busy through games and training. We quickly discovered she wants to learn and works hard at it! Within a week her separation anxiety has significantly reduced, she has learned to sit, stop, slow down and lie down and comes when she’s called at the fully enclosed off leash park. We’re still working on a lot, including the biting but she has never been nearly as out of control as that one time and in many cases she goes to bite but stops herself and bounces her nose off me instead.

We have been going everywhere together: the beach, parks, car rides, exploring the neighborhood and we even went to Woofstock, the largest outdoor festival for dogs in North America! She loves other dogs and people! We have truly found a best friend and family member and even as I wrote this I feel emotional when I consider what a dog of her breed, size and willful disposition would turn out like if she didn’t have the first people in her life that made the responsible decision to give her up, and Chris and I to let her know we refuse to give up on her and will do what it takes to make it work for us all to be happy.

The name Frida means peace and/or beloved. I felt such a hole in my existence without my bird Baby. I know it sounds crazy but I truly wonder if she sent me Frida to settle me and give my heart some peace and love. It’s what I like to believe. : )

One response to “Frida’s Adoption Story”