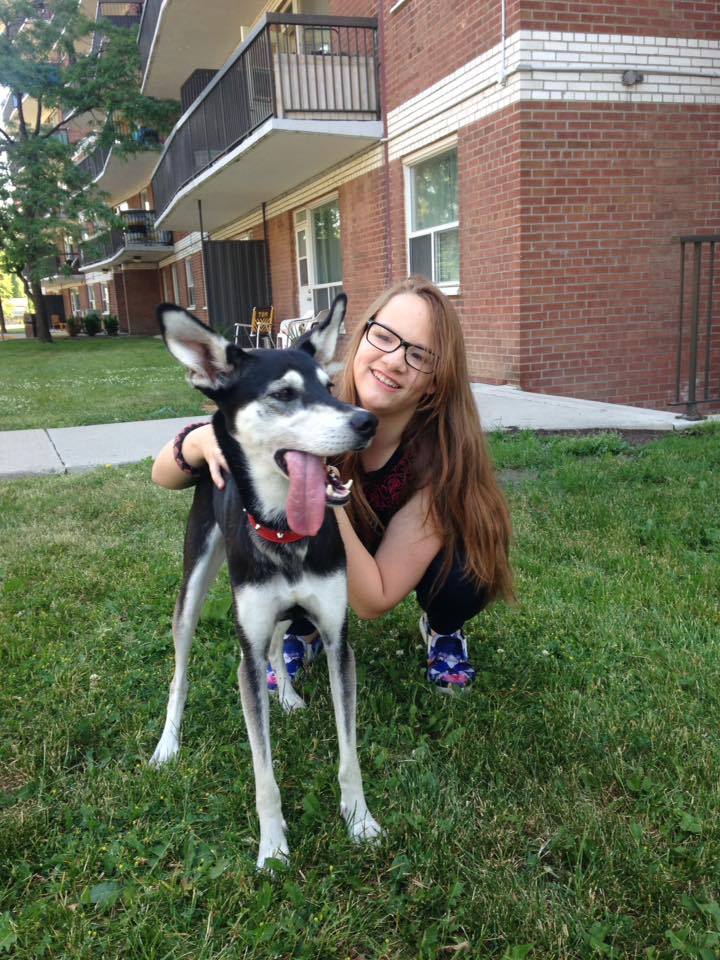 One day at the dog park there was a beautiful husky mix running around and chasing after everyone.  I suddenly found myself alone with the owner who, after a brief conversation, confessed her family wasn’t taking very good care of the dog anymore. My puppy Frida and “Toby” had become friends and were playing nicely together, she then asked me if I wanted to take the dog home and try her out; and I could return her if it didn’t work out. She casually mentioned that Toby was almost 2 and had already recovered from a broken leg because she was hit by a car. The idea of someone giving their dog away on the spot seemed really strange and I couldn’t shake the suggestion. I entertained the idea since Frida is a rescue herself and was raised with another dog and loves them but because she is a large breed, I live in the city and she is my first dog in adulthood so I thought I’d better stick with just one. Still, I really liked Toby…

The more I thought about it the more I felt like I needed to know more and help. I couldn’t stop thinking about her and kept going to the dog park hoping to see them again. Well, I didn’t see them in the park but I did see Toby in the front door of her house across the street looking at the dog park longingly. I couldn’t take it anymore and just went up to the house with Frida.

What I found inside was a big family with an age range from babies to teenagers, a father at work, a mother left to care for everyone and everything, and a neglected, big dog with a lot of energy that was lacking structure and consistency. Toby was one of the most hyper dogs I’ve ever seen and was way too skinny. She confided that they couldn’t afford to feed her properly and just really wanted her to have a good home. It was apparent the family felt horrible and knew that adopting Toby was a mistake. They were not intentionally abusing her but they weren’t taking proper care of her. They were doing the right thing by finding her a home.  I wanted to be sure she went to the right home. This was going to be a challenging dog to rehabilitate!

I took a picture of Toby and posted it on Facebook with a little story. To my surprise my Dad said he was looking for a second dog to join the family and was very interested. I didn’t want to get my hopes up since seeing Toby whenever I wanted would be a dream come true but a few days later his girlfriend and stepdaughter contacted me to say he really wanted the dog and I should bring her as a surprise for my dad on Father’s Day. I spoke to dads girlfriend over the phone and told her everything I knew about Toby:

All of this was understood and accepted, not to mention they have a 12 year old German shepherd/collie mix named Dakota, so they have been great dog parents to a large breed for over a decade.

I agreed to bring Toby over for Father’s Day so I called the Toby’s family right away to inform them we had found a great home for Toby if they would agree to to letting her go the following day.  To my excitement and delight – They were.

We met them in the park, Frida and Toby played for over an hour to release some of their energy since they would be traveling across the city in a car.  This being Tobys first experience in a car and Fridas together with a friend we said our good byes to the family and off we went to Toby’s new forever home!

My Dad was so surprised and happy. We spent the day with his 12 year old German Shepard mix Dakota, Frida, Toby and my brothers dog Duchess, who was rescued from Tennessee  a couple of  years ago. We are just one Big Happy Dog Family!!!  It’s been a couple weeks now and Dad has kept me up to date on Toby’s (now named Shelby’s) progress. Shelby has been improving on the leash and her energy levels are reduced because someone is with her, and giving her attention constantly. She is getting along great with their 12 year old dog, Dakota, and everyone in the neighborhood just loves her.

I feel like I played a very small role in helping this dog compared to what my Father and his family are doing for her. They are the heroes! I just recognized a situation and was able to help.  It takes a lot of patience and consistency to rescue a dog nearly 2 years old with so many issues. It’s so easy to not take the more challenging route and to just buy from a breeder or pet store but my father and his family chose not to.  – They saved a life! I’m so grateful and proud that Shelby never had to experience a day in a shelter and Frida and I can check in and visit whenever we like.

A “secondhand” dog might not be for everyone but they should be considered first. The love they will repay you with will be worth the work and the satisfaction, it is incomparable. This picture is of my stepsister Anjelica. They already look like best friends and Shelby looks delighted, just look at those ears and mouth, it speaks volumes!  We are so happy for them all.